Building on its position as the second busiest cruise Port in the world, Port Canaveral is the homeport for the Enchantment of the Seas, which will offer a three-night cruise itinerary departing Port Canaveral on Fridays and arriving at Nassau, Bahamas the next day.  The third day, the ship will call at its private island in CocoCay, Bahamas followed by an overnight sailing back to Port Canaveral.  The four-night cruise will depart on Mondays and include an overnight at sea before calling on Nassau and CocoCay.

“We are excited to bring Enchantment of the Seas back to Port Canaveral,” said Michael Bayley, President and CEO, Royal Caribbean International. “With three- and four-night itineraries to the Bahamas, Enchantment is the perfect short getaway from Port Canaveral.”

Chairman of the Canaveral Port Authority Commission Admiral Wayne Justice (USCG-Ret.) joined with Port staff in welcoming the Enchantment back to Port Canaveral. The Enchantment of the Seas Captain Toni Tomljanovic was presented with a traditional plaque to commemorate the vessel’s return to the Port. “Port Canaveral continues to demonstrate its role as a premier Port for the world’s cruise market and we thank Royal Caribbean for bringingEnchantment back home,” stated Chairman Justice. 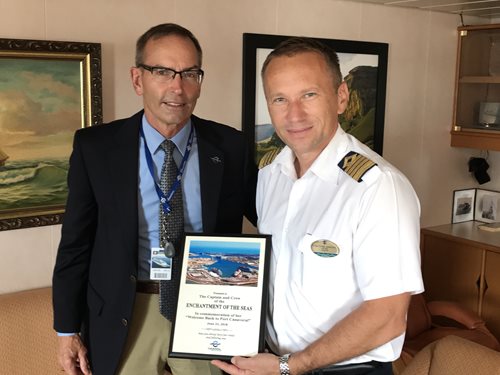 Chairman of the Canaveral Port Authority Commission Admiral Wayne Justice
presents welcome home plaque to Enchantment Captain Toni Tomljanovic
(Canaveral Port Authority photo)
The Enchantment of the Seas is one of RCI’s Vision Class cruise ships and is 990 feet long.  The ship was recently refurbished and includes new restaurants and entertainment.  The ship features eleven decks, eight bars and lounges, and entertainment amenities including a rock climbing wall, bungee trampolines and a splash deck – an interactive play fountain.  Other features include a Latin-themed lounge, shopping malls, and a discotheque.

This site uses Akismet to reduce spam. Learn how your comment data is processed.